Congratulations to Benjamin Young of Hydaburg, Alaska, who was recognized as the 2019 Culture Bearer by the Alaska Federation of Natives. 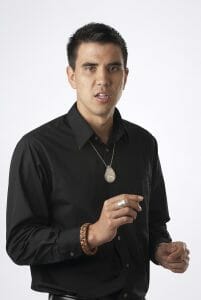 Young is Haida Raven of the Yahgw’láanaas Clan and his Haida name is K’uyáang. He has three brothers and one sister. Two of his brothers (TJ and Joe Young) are renowned Haida carvers. The family grew up in a traditional Haida environment, learning from their grandparents the importance of honoring the land and practicing subsistence gathering activities.

Young learned the Haida language (Xaad Kíl) from his grandfather Claude Morrison (Kúng Skíis). Morrison was a respected Haida Elder who lived to the age of 100. Since his early teenage years, Young has dedicated his life to learning and preserving the Haida language.

Morrison was one of the last remaining fluent Haida speakers in Hydaburg. As Young watched his grandfather age, he became concerned about the future of the language in his community.

For the five years preceding his grandfather’s death, Young devoted his time to studying the language and actively learning in the living room of his grandparents’ house.

Young is a Xaad Kíl language speaker and teacher. As a teenager, he taught his first language classes at the Sealaska Heritage Institute’s Latseen Leadership Academy. Since that time, he has worked on many other language projects and programs to perpetuate the Xaad Kíl language. 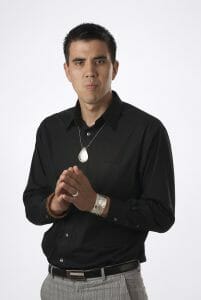 He has served as a language mentor, researcher and curriculum developer. Despite his age, Young is revered in his community as a culture bearer and is a recognized leader throughout the Haida tribe. Through his language work, he has helped strengthen ties between the Haida communities in Alaska and the traditional homelands of the Haida people in Haida Gwaii, British Columbia, Canada. He currently teaches in a Haida language immersion program in his home community of Hydaburg.

Young graduated from Butler University with a degree in secondary education and began teaching in 2014. He has served as a cultural specialist with Sealaska Heritage Institute, the Xaadas Kíl Kuyaas Foundation, and the Ketchikan Indian Community, among other organizations.

Young has worked with Elders Woodrow Morrison, Alma Cook, Annie Peele and Erma Lawrence. Over the years, he has been influenced by linguist Dr. Jordan Lachler and Gwich’in instructor Hishinlai’ Peter.

Young has been instrumental in helping bring awareness to not only the Haida language but also the critical importance of all Alaska Native groups ensuring that their respective languages are being preserved. He serves as a resource to many Alaska Natives who have been inspired by his work in language preservation.

Young is one of only ~50 fluent Haida speakers alive today. He has contributed to developing dictionaries, glossaries and phrasebooks for the Haida language and has spent countless hours researching and trying to record the various dialects of the Haida language (Masset, Skidegate and Alaska).

Young was recently recognized at the Tlingit and Haida President’s Awards Banquet with a “Language Warrior” honor for his role in helping to preserve his language.

“The community has been amazing in supporting the preschool. They have been donating culturally appropriate foods for snack time. The biggest things the parents and community could do to support the preschool is to send the kids ready to learn, begin to learn the language, and encourage the children to speak what they know. We are teaching and speaking to these children four hours a day in Xaad Kíl; they know more than you could imagine. They just need to be encouraged and praised for speaking the language. Also, the community can make it commonplace to use the language at social functions and everyday interactions.” — Ben Young, when asked about the support of the community of Hydaburg in helping students learn about the Haida language.