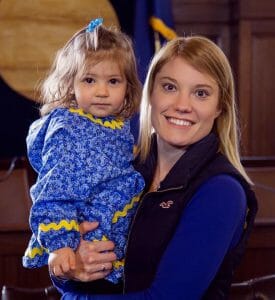 Kloster said she and her fellow appointees — along with friends and colleagues from other organizations working on behalf of Alaska Natives — are sisters in the cause of bringing visibility and accountability to the issue of missing and murdered Indigenous women and girls, among other issues facing Alaska Native people.

It is a phenomenon so devastatingly common that it is widely known by its own acronym — MMIWG — that rolls off Kloster’s tongue when she talks about what she hopes to achieve on the commission and in her work as executive director of two statewide nonprofit organizations,  Native Peoples Action and Native Peoples Action Community Fund. The Urban Indian Health Institute (UIHI) attempted to quantify the problem in 2018 with a survey of law enforcement agencies around the country in cities with significant populations of American Indian and Alaska Native people and wound up documenting a closely related problem: a complete lack of uniform data to identify the size and scope of the issue. Many agencies simply didn’t respond to Freedom of Information Act requests from UIHI, and those that did often provided incomplete data sets or revealed discriminatory record keeping, like in the case of one agency that defaulted to “white” when the race of a victim was unknown. What they could quantify, though, was that Alaska has one of the largest MMIWG problems in the nation — and that’s not a per capita assessment, those are raw numbers.

Kloster spent more than 10 years behind the scenes in politics before taking the lead at Native Peoples Action, so she knows that lack of data is a major problem. She served as an aide to former U.S. Senator Ted Stevens before working for the Alaska attorney general’s office and several different legislators at the state Capitol in Juneau.

“Being someone who’s been in the policy world, I know one of the first things legislators ask for is data,” Kloster explained. “How can I ask for changes if I can’t quantify the problem?

“Despite the lack of data, we know from speaking with our communities, plus the UIHI report, that we have a serious problem in Alaska and across the country. We are dedicated to continuing to push for changes on every front to better protect Native people — including public safety reforms, better data systems, increased cooperation between local, tribal, state and federal agencies, more attention and resources for the Cold Case Unit to bring justice and closure to families, and we continue to promote healing and wellness.”

Kloster and her close friend and fellow activist Charlene Aqpik Apok, the director of gender justice at Native Movement, as well as Keneggnarkayaagaq Emily Edenshaw, executive director of the Alaska Native Heritage Center, were appointed to the eight-member commission together. They join another Alaska Native woman, Amber Fullmer, a CIRI shareholder and current commissioner who is the director of the University of Alaska Anchorage’s Native Student Services department.

In her role as executive director of Native Peoples Action, Kloster is all about increasing the number of Alaska Native people holding elected office and serving on the innumerable commissions, advisory boards, community councils and as directors of the many nonprofits around the state.

“Alaska Native people need to have a seat at every decision-making table to influence change and protect our traditional way of life,” Kloster said.

Not surprisingly, the Anchorage Public Safety Commission isn’t Kloster’s only form of public service. She’s also an elected member of the Russian Jack Community Council, a neighborhood group in Anchorage; serves as a board member for the Muldoon Farmers Market; serves on the Russian Jack Springs Park and Chanshtnu Muldoon Park Master Plan Committees; and is a member of the Alaska Native Sisterhood.

Kloster said her interest in policy was inspired early on by a visit to Washington, D.C., with Close Up when she was a 17-year-old student at Juneau-Douglas High School.

“I remember flying into our nation’s capital, walking through the monuments, Smithsonian museums and congressional buildings and feeling inspired,” Kloster said. “Meeting people and seeing the impacts you can have there, I thought, ‘Alright, this is where I need to be, this is what I need to do.’ I’m all about helping and wanting to make an impact for Alaskans.”

Kloster credits her grandmother, Christine Jenkins of Wrangell, for helping develop her relationship to her culture and traditions. “She is one of the most influential, important people in my life. I’ve always had a close bond with her.”

Kloster holds a master’s degree in public administration from the University of Alaska Anchorage and got her bachelor’s degree in business administration with a minor in English at Fort Lewis College in Durango, Colorado. Kloster received Sealaska scholarship support as a student.