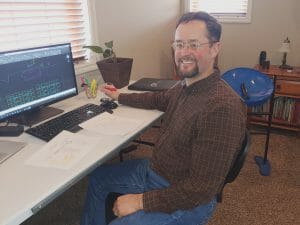 Corporate Communications:  We’ve been working remote for almost a year now. Many of us haven’t seen one another in months. On camera things look good. But the reality is many of us are working from our kitchens, our couches or our bedrooms, juggling family and work demands or surrounded by an awful lot of quiet. In this short podcast, we’ll peel back the zoom background to hear from Sealaska employees in all corners of the company, about how they’re staying focused on serving our shareholders, developing new business strategies for this strange new world, and just getting through another day working from home. This is Insider Insights. Take a listen.

Scott Clark: Yes, my name is Scott Clark. I’m a designer planner. I work for the Sealaska Technical Services office in Richland, Washington. I’m in a home office right now. We’ve been allowed to return to our offices part time – the state is letting us go back up to 25% of the people or employees in each building. So we are kind of taking turns doing tag team throughout the week. So I’m in the office Monday, Wednesday and Friday. And then I’m at home on Tuesday and Thursday.

CC: And tell me about your home office.

SC: Fortunately, I’m in a bedroom and I’ve got a fold-out table with my computer and the whole works. So it’s a room with a lock on the door. So I’ve been fortunate that way. (Laughs.)

CC: That is fortunate.

CC: How are you keeping your spirits up and staying energized during this extended adjustment?

SC: We’ll try to go for walks and the our kids like to go on drives. So we’ll go out in the countryside and go for a drive like on the weekends. And I’m into music. I like playing different musical instruments. I play the guitar and piano and I’ve recently acquired a steel drum from my boss, which was a great story.

CC: Scott’s boss is Dave Kostorowski, the general manager of Sealaska Technical Services. Dave kicks off the Monday morning staff meeting with icebreaker questions that are supposed to build trust on the team. So one day last August, the question was about bucket lists. When it was Scott’s turn, he said he wanted to learn to play the steel drums. This was a strange coincidence, because it turns out Dave’s kids all played the steel drums in elementary school, and he claims to have attended more than 100 – and this is a quote – very long, painful concerts. In Dave’s version of the story, he let out an audible sigh and said something less than supportive. Scott says Dave told him he’d be playing on the street corner for spare change. But whose version of this is true isn’t really important. What’s important is that Dave later felt bad about not having been very supportive. So we went out and bought him a steel drum. Or who knows, maybe one went missing from his house. In an effort to show Scott that STS is a place that fully supports its employees dreams, Scott is now invited to play at all employee events. The first song he learned was happy birthday. He even learned to play the Washington State University fight song to honor Dave on Boss’ Day. 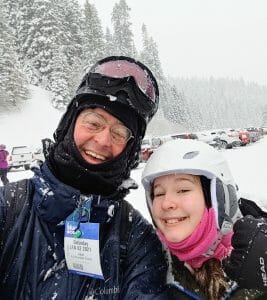 SC: And so I’ve been playing that and what I’ll do is I work on AutoCAD. So being at home and being in a quieter place, it’s sometimes gets a little mundane. And so what I’ll do is I’ll take little breaks from the computer screen and my own AutoCAD drawings. And so I’ll take a little rest here and there just for a minute or two and play the steel drums. And so that’s really helped keep my momentum going and my spirits up.

CC: Have you been playing for your coworkers via Zoom during the pandemic?

SC: We have. And that’s been a learning experience trying to get the timing right and the delay in the signal, but we’ve done pretty well. Like when we tried to sing happy birthday with the steel drum. It’s been a lot of fun. But I think it’s been good for some laughs and good for the camaraderie. And it seems to be something that gets a lot of requests.

CC: Well, so my last question is, what part of the work-from-home experience will stay with you when you return to the office?

SC: I would say one of the things I learned to be more cautious of for myself is the use of the technology. The Teams messages, the emails, and how those might come across to people. I might have a tone in there that I didn’t intend and also being cognizant of who the messages go to, who needs to hear what and I guess being more conscious of the technology and how I use that. That’s another thing that I realized I took for granted being in office was being in a face-to-face environment where you can read each other’s body language and then being away from that was something that took some getting used to and learning how to deal with.