Growing up in Juneau, Rain Felkl had no fear of the mountains, she said.

Her parents would let her play at the glacier or spend the night on top of Thunder Mountain unsupervised, entrusting XTRATUF boots, hand-me-down outdoor gear and the unwavering confidence that characterizes childhood with her safe return home. “They [my parents] didn’t instill fear in us when it came to the outdoors,” Felkl said.

Back then, she “didn’t really do anything extreme,” she said. But, today, Felkl—who describes herself as a lover of human-powered adventure—is planning an expedition to climb Mount Denali.

Named after a Koyukon Athabascan word meaning “the high one,” Denali is the highest mountain peak in North America at 20,310 feet, located 650 miles northwest of Juneau. Felkl, a Sealaska shareholder descendant whose Tlingit name is Kuwaats’, could be the first Tlingit woman to summit Denali, though she has not been able to locate historical climbing records of this nature.

She will be accompanied by several other members of AK Mountain Women (AKMW), a group “dedicated to challenging and educating themselves and others about glacial ski mountaineering in remote mountains.” Felkl joined the all-female community after returning from college in the red rock deserts of Grand Junction, Colorado, and reconnecting with two childhood friends, both outdoor enthusiasts who wanted to create a platform for women mountaineers.

During the three-week-long journey, funded in part by Sealaska’s philanthropy program, the AKMW crew will create multiple base camps and live on the glacier, traveling by two rope teams of three via the West Buttress, a route that the majority of climbers on Denali attempt. They plan to split-board or ski off the summit, but reaching Denali’s peak is not an easy feat—of the roughly 35,000 people who have attempted to do so, less than 60 percent have been successful.

“The biggest thing we’re going to be up against is altitude and the weather,” Felkl said. On top of the overall technical and physical difficulty of the endeavor, climbers face unpredictable storms and extremely windy conditions, as well as acclimation to Denali’s tremendous base-to-summit elevation, which is greater than that of Mount Everest.

Born out of a love for the ‘vast, icy, rugged terrain of Alaska,’ AKMW has organized two expeditions to date, both successful: a 21-mile ski mountaineering climbing project with two first ascent objectives of unnamed, unclaimed peaks on the remote Stikine Icefield in Southeast Alaska, and an expedition high into the mountains of Wrangell-St. Elias National Park and Preserve, an area that has seen only one other recorded visit.

Though most of the expedition members live in-state, Felkl currently resides in the Wasatch Mountains of Salt Lake City, Utah.  She and the rest of the group arrange phone calls about once a week to prepare for upcoming expeditions; they mostly talk about logistics—route planning, gear, medical training, and more—but also about topics like sustainability, mindfulness and diversity and inclusion.

AKMW focuses on female empowerment, but its members are working to break down barriers in the outdoors for people of all gender identities, sexual orientations, abilities, cultural backgrounds and racial and ethnic groups. “We ask ourselves how can we include more people and how we can make them feel welcome,” Felkl said.

The ‘don’t loop,’ a term coined by former Forest Service biologist John Robinson, suggests that people are less likely to engage in activities that they don’t see people like themselves involved in. Among the overwhelming evidence that minority groups are underrepresented in the outdoors, one example is a 2014 review of Outside magazine—a publication which ‘aims to inspire active participation in the world outside,—’ which found that only 103 of the 6,986 photographs published in issues between 1991-2001 featured Black people. Even less represented are Indigenous people, members of the LGBTQ+ community and people with disabilities.

Both on and off the mountain, the women of AKMW are on a mission to close the ‘adventure gap,’ or lack of access to wilderness environments for Black, Indigenous and People of Color (BIPOC) and other minorities in America, by increasing representation of underrepresented groups in the outdoors. 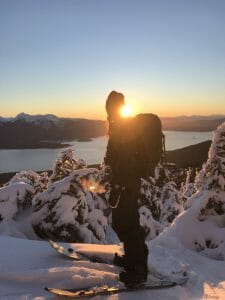 “It’s a heavy topic to kick off the weekly phone chats, which shows how deeply rooted this topic is for us [AKMW],” Felkl said. “But we all come together to share our thoughts, dreams, backgrounds and experiences in hopes to inspire and enable others, and for love of the mountains.”

At the end of the phone calls, the women usually assign each other challenges for the week, from practicing roping to keeping an exercise log. And while technical skills and physical fitness are a priority, Felkl said that mental health is critical, too. “We always check in with one another and gauge how everyone is feeling,” she said. “You really feel supported and heard.”

For Felkl and many of her peers, practicing mindfulness continues beyond the process of preparing for an expedition: being in the throes of a wild adventure is often the greatest opportunity to be mindful, she said. “I find peace in the mountains,” Felkl said. “It’s like a moving meditation.”

To be mindful is also to be aware of those who paved the way before you, Felkl said. Ever since the group decided to take on Denali, they have been engaging in conversations about role models like Arlene Blum, who led the first all-female ascent of the mountain in 1970.

Not even a decade later, Blum led the first US (and first female) ascent of Nepal’s Annapurna Circuit, considered the most dangerous and possibly most difficult of the world’s 8000-meter peaks. She wrote a book about it, titled ‘Annapurna: A Women’s Place,’ which Felkl highly recommends.

Blum raised funds for the 1978 Annapurna trip by selling t-shirts printed with the slogan ‘a woman’s place is on top,’ which raised over $80,000. “She [Blum] is really inspirational because she led the way for a lot of female mountaineers,” Felkl said. “She did it in a lighthearted way. And I really love the t-shirt cause it’s just rebellious and fun.”

As a grassroots project, AKMW decided to follow in Blum’s footsteps by designing a t-shirt to help fund their Denali expedition. Five percent of the proceeds will be donated to the Coalition Snow Native Scholarship, which supports access to avalanche training and backcountry skiing and riding in Indigenous communities.

“It’s really cool because we finally feel like we have the means to support something beyond ourselves,” Felkl said. “That has been a goal for us…to support and build stronger communities, and to inspire other people to join us and find meaning in our experiences.”

Later this year, Felkl will embark on the endeavor of a lifetime to climb Mount Denali with AK Mountain Women, funded in part by a donation from Sealaska’s philanthropy program. Launched in 2014, the program invests in the greatest positive impacts to traditional homelands and the environment, as well as enrichment and protection of the livelihoods and cultures of our people and communities, to help lead a thriving future.