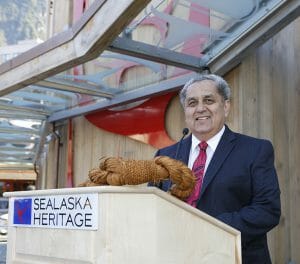 The ceremony is scheduled at 6 pm (AKDT), Friday, June 4. The service will be available through the MySealaska website and open to the public via YouTube. All loved ones, friends, acquaintances and well-wishers are welcome to tune in.

Kookesh Walked Into The Forest on May 28 at his home in Angoon surrounded by family at the age of 72. Albert was Tlingit, Eagle/Teikweidí (Brown Bear clan), and he was a true Aan Yadí — a noble person — who served Native people on many levels, including as co-chair of the Alaska Federation of Natives; at the Alaska Native Brotherhood, where he served as Grand Secretary and Grand President and honed his leadership skills; as a director of First Alaskans Institute; and as lawmaker who served in the House and Senate for 16 years.

He is survived by his wife, Sally, and his children, Elaine (Kookesh) Jack, Reanna Kookesh, Albert Kookesh III, Walter Kookesh, and Sealaska Vice President Jaeleen Kookesh. He is also survived by many grandchildren, brothers and sisters, and nieces and nephews.

Upon his passing, Sealaska published a statement in memory of Kookesh, who left a lasting legacy as a director and chair. SHI also posted a memorial for Kookesh, who served as the institute’s vice president of its board of trustees.