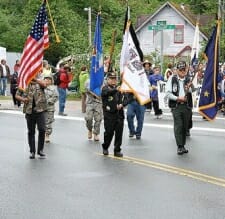 “Finally, this long-time need of our Veterans is being addressed. On behalf of the Sealaska board, we thank our Alaska Congressional Delegation for their unwavering support,” said Board Chair Joe Nelson.

Alaska Native Vietnam era Veterans who missed the opportunity to apply for Native allotments because of active duty can now apply. Senators Lisa Murkowski (R-AK) and Maria Cantwell (D-WA) advanced a package of public land bills that included the bill finalizing equitable treatment for Alaska Native Vietnam Veterans.  The public lands package was approved in the U.S. Senate on February 12, 2019, with the U.S. House approving the package on February 26, 2019. It was signed into law by the President on March 12, 2019.

Sealaska, along with many other Alaska Native leaders, advocated for the Alaska Native Vietnam Era Veterans Land Allotment Act for many years. “Finally, this long-time need of our Veterans is being addressed. On behalf of the Sealaska board, we thank our Alaska Congressional Delegation for their unwavering support,” said chair Joe Nelson. “I’d also like to acknowledge and thank former AFN Senior Vice-President Nelson Angapak, Sr. for his years of hard work on the legislation.”

The bill directs the Secretary of the Interior, in consultation with the State of Alaska and Alaska Native Corporations, to identify a pool of federal land to be made available for allotment selections.

Approximately 2,800 Alaska Native Vietnam era veterans from any region of Alaska, who served between August 5, 1964, and December 31, 1971, will have the ability to select an allotment from within the designated pool of lands.

About Lands Available for Allotments

“Sealaska will ensure that our Southeast Alaska Native Vietnam Veterans, or their families, have the information and technical assistance that they will need to submit allotment applications,” said Jaeleen Kookesh. Kookesh is Sealaska’s VP for Policy and Legal affairs and led Sealaska’s advocacy efforts on this long-standing Sealaska policy priority.

Sealaska will share more information about the process as soon as it becomes available.