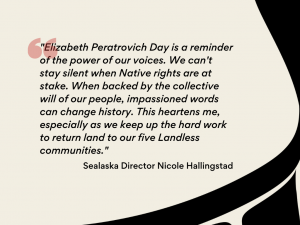 Sealaska proudly supports the continued work and efforts of the ANB and ANS. The organizations are hailed as the original champions of Native land and civil rights. 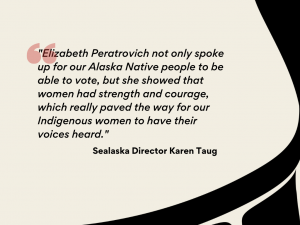 Among the speaker’s recognizing Elizabeth Peratrovich was Sealaska President and CEO Anthony Mallott. “I love putting myself in the room with her at that moment. She was beyond courageous. She was smart. She was passionate. She knew that the ANB and the ANS were behind her. She knew what she was doing was the right thing to do,” Mallott said. “She was the tip of the spear for the ANB and ANS.”