In celebration of Native American and Alaska Native Heritage Month, Sealaska recognizes just a few of our many shareholders who have served in the Armed Forces as part of our #RecognitionMatters Veterans Campaign. American Indian and Alaska Native people have a longstanding tradition of service and sacrifice, as they serve at a higher rate than any other demographic in the entire country. 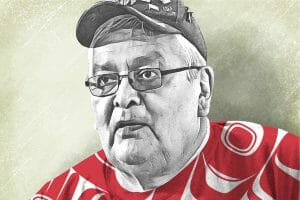 As a country, we take time every November to honor U.S. military veterans. This November, Sealaska is holding space for the veterans closest to our hearts: Alaska Native Veterans. We are honored to share these stories.

Haida veteran Sylvester “Sonny” Peele III served in the U.S. Navy on the USS Hornet, an aircraft carrier which traversed the Pacific throughout the Vietnam War. Peele grew up in Hydaburg and was drafted upon turning 18. One of the most memorable parts of Peele’s service was picking up the Apollo 11 command module and astronauts upon their return to Earth.

“That was one of the best parts of my life,” he said of his time spent in military service. “There were places I went I wouldn’t have been able to go without going in.”