Sealaska recently hired shareholder Matt Carle as director of community outreach. In this role, Matt is responsible for managing the company’s engagement with shareholders and Southeast Alaska communities in the areas of education, workforce development, and economic development. 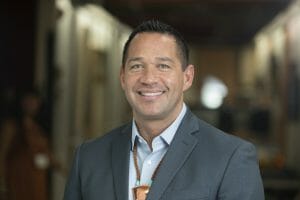 Matt is a Sealaska scholarship recipient who grew up in Hydaburg and later graduated from Juneau-Douglas High School. He is a familiar face in the region having played several years in the Gold Medal Basketball Tournament after a decorated college career where he played at the University of Alaska in Fairbanks. Matt is also an enrolled tribal member of the Central Council of the Tlingit and Haida Indian Tribes of Alaska and the Hydaburg Cooperative Association. His parents are Matthew and Arlene Carle from Hydaburg. “I’m really honored to return home to my region and for this opportunity to serve my people in Southeast Alaska,” said Matt. “I’m already inspired by the resurgence of culture in our communities and the important work being done to revitalize our languages.”

Matt spent 15 years working at Alyeska Pipeline Service Company supporting the organization in the areas of crisis communications, stakeholder engagement and public relations activities. In addition to his communication roles at Alyeska Pipeline, he also served as the chief of staff and the Alaska Native program director where he managed Alyeska’s commitments to the Alaska Native Utilization Agreement, scholarships, internships, employee development, community outreach, and stakeholder relations.

Matt’s parents are Matthew and Arlene Carle from Hydaburg.