Blood Quantum Q and A

In the past year, Sealaska has hosted a variety of conversations on Native identity and conducted extensive outreach to shareholders and descendants about the issue. The purpose of these efforts was to better understand how blood quantum impacts our community, and to provide background and context to shareholders.

Topics included how blood quantum was incorporated into the Alaska Native Claims Settlement Act, its history related to enrollment requirements at Sealaska, what tribes and other Alaska Native Corporations require, cultural values related to the issue, a glimpse into what the population of Sealaska shareholders and descendants looks like in the future, and answers to questions from participants. Included below are responses to some of the questions we received. 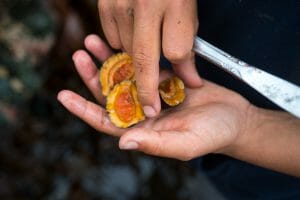 Q: What is blood quantum?
The term “blood quantum” is used to refer to the amount of Alaska Native or American Indian blood a person has. Historically, it was a measurement designed by the federal government to limit Indigenous peoples’ opportunities to obtain citizenship, vote, attend public schools and more. Over time, the government’s version of how to define whether or not someone is Alaska Native or American Indian was adopted by tribes and other entities to determine eligibility for enrollment and other services.

Q: Where did the concept of blood quantum originate?
Quantifying blood quantum first began in the United States in the early 1700s in the Colony of Virginia, where it was used to limit the rights of anyone who was more than half Native. It was carried forward into the 19th and 20th centuries to limit the federal government’s treaty obligations to Natives—no more Natives, no more obligations. Eventually, tribes started relying on blood quantum in their enrollment requirements with the passage of the Indian Reorganization Act of 1934.

Q: Which tribes or Native corporations have eliminated the blood quantum requirement?

Many tribes, like Central Council of the Tlingit and Haida Indian Tribes of Alaska, rely on documented lineal / biological relationships (“lineal descent”) to an established tribal member rather than blood quantum.  According to a 2016 study, approximately one-third of Lower 48 tribes do not use blood quantum to determine eligibility.

ANCSA was amended in 1991 to allow shareholders of Alaska Native corporations to determine for themselves what standards should be used to determine eligibility.   Shareholders of Arctic Slope Regional Corporation and Calista voted to remove the blood-quantum requirement for their companies.

Q: What does Sealaska require to enroll?
To enroll with Sealaska, lineal descendants must be one-quarter Alaska Native blood quantum (including Tsimshian people who are not enrolled in the Metlakatla Indian Community, Eskimo or Aleut blood, or combination thereof).

Q: Why does Sealaska want to expand eligibility by removing blood quantum requirements?

In 2007, Sealaska shareholders passed a resolution to create Descendant (Class D) stock to address the arbitrary nature of ANCSA’s original eligibility requirements, which stipulated that enrollees had to have been born by December 18, 1971. Extensive demographic surveys conducted ahead of that vote clearly illustrated that Native blood quantum in the population would continue to decline. The 2022 resolution is an extension of the principle behind the 2007 campaign — we live in a global and rapidly changing society and must adapt our qualifications to ensure our young people remain connected to Sealaska and their culture.

Q: What is the potential financial impact to Sealaska shareholders if blood quantum requirements are removed?
Our current estimate for the number of eligible descendants if the one-quarter blood quantum requirement is eliminated is 17,000. Based on historical data, we expect about 8,500 of those eligible would enroll within the first six years. If that estimate is correct, dividends could be reduced by as much as 40%. However, that estimate does not account for growth in operational income, which has been a consistent trend over the past several years and could offset any reduction.

Q: What is the potential financial impact to Sealaska if blood quantum requirements are removed?
Sealaska has been investing greater and greater amounts of money into shareholder benefits since 2015, many of which are already available to descendants, such as the scholarship program. We plan to continue this trend. The success of our operating businesses and investments has allowed us to increase our support for shareholders and descendants while continuing to grow our business.

Q: If blood quantum requirements are removed, is there a certain age lineal descendant must be?
To enroll in Sealaska, descendants must be 18 years of age.

For tribes like Tlingit & Haida, determining whether someone is a lineal descendant involves providing an original birth certificate listing both parents. For people who were adopted, or for those whose paternity is unknown, an affidavit may be provided to confirm identity.

In 2007, Sealaska shareholders also approved the creation of Class E (Elders) stock to help ensure the value of original shares was not diminished by adding new shareholders.

Sealaska estimates that there are approximately 15,000 lineal descendants of original shareholders that are currently not qualified to enroll as descendants.

Q: What are gifted shares?
Shares that a shareholder has given to a child, grandchild, great grandchild, brother, sister, niece or nephew.

Q: What are inherited shares?
Original shares that have passed, either by will or by law, upon the death of the original shareholder.

Q: Why now?
The 50th anniversaries of the Alaska Native Claims Settlement Act (in 2021) and Sealaska (in 2022) have led us to consider both the intent of the original legislation and to look ahead to how our company will be governed and remain strong over the next 50 to 100 years. Readily available demographic data tells us this issue will be of increasing importance in the coming decades.