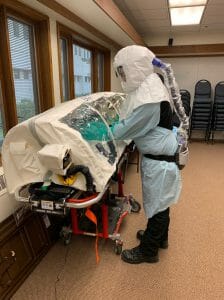 Fire Chief Rich Etheridge has been working as a first responder for almost 30 years. From volunteering in the early 90s to working full-time since 2002 at Capital City Fire/Rescue in Juneau, firefighting has held a profound and substantial place in his life.

“The best part about my job is being able to support the line firefighters and make sure they have the tools and training to get out there and have a direct impact on the community,” Etheridge said.

But since the pandemic hit around late March, Etheridge says that the station has had to adapt to changing guidelines in order to protect the community as well as themselves.

New station practices have involved most of the same verbiage that the state has ordered people to do in their own homes, such as social distancing, maintaining a 6-foot distance when able, and implementing consistent hygiene practices.

Although one may think that the volume of first responder duties might have decreased since the outbreak because there are less people out and about, you’d be surprised to hear that firefighters and first responders are among the only people implementing testing; adding on to their already serious responsibilities. Etheridge says it’s kind of like a double-edged sword.

“Some of the calls that we normally go to have decreased because there are less people out getting injured, and a lot of the people that have been getting sick have been reduced, but on the other hand, we have a lot of extra duties with the COVID-19 testing,” Etheridge said.

Capital City Fire/Rescue has been doing an abundance of testing in the community at their training center while also going directly to people’s homes. Etheridge said that they were deployed to test all of the state legislature the week before Memorial Day.

Homelessness needs have also been top of mind, as the fire station is in charge of picking up individuals who possess symptoms and transferring them to locations such as Mount Jumbo Gym, performing personal swabbing test kits, and allowing people to recover in isolation until they get their results back.

Etheridge says that even though it’s additional work for the first responders, they’re happy to bridge that gap in order to make it easier for folks who aren’t able to go to testing sites and receive the care they need. It also helps that they have the equipment and resources needed to carry out these calls, courtesy of Sealaska’s relief package.

“The donation from Sealaska is allowing us to purchase medical outer garments that can be decontaminated after each call,” Etheridge said. “It’s incredibly efficient and provides a higher level of protection than a disposable paper gown.” 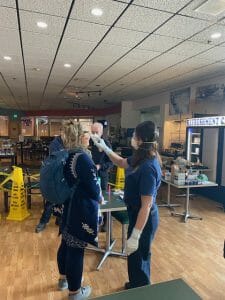 With the help of Sealaska, the garments protect the responders from any kind of bloodborne pathogens and also provides some level of insulation and deterrence against the elements; things that are wildly vital to the first responders own safety and health in general, but even more so during the pandemic.

“It will really help make sure that people don’t have to wash uniforms every time they come back from the station,” Etheridge said. “They can just rinse off the equipment and let it hang to dry.”

Etheridge says that although the state of Alaska has begun its steps in reopening, it’s still important to continue social distancing to protect oneself and family. His prediction is that there could very well be an increase in calls due to the influx of travelers coming in from out of state when the 14-day quarantine ban lifts, and a proportionate increase in human to human contact.

As Capital City Fire/Rescue continues to keep our community healthy and provide services at the highest level of “excellence, professionalism and commitment,” as stated in their teamwide vision, Sealaska is proud to contribute to the fire station’s mission to serve and protect in a competent, professional and proactive manner.

Gunalchéesh, Háw’aa and T’oyaxsut ‘nüüsm to all of our first responders. Sealaska stands with you.