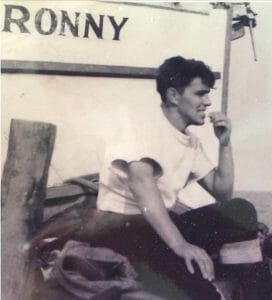 On Feb. 2, Fred (Sḵwaal) Hamilton, Sr. of Craig will mark his 100th birthday. The day has been designated by the Craig City Council as Fred Hamilton, Sr. Day.

Hamilton is the son of George (Siigaay) Hamilton, Sr. and Joy (Haana Iwaans) Edenso Hamilton. He is of the Raven moiety and his crests are Owl, Brown Bear and Flicker. Longevity is in his genes. Hamilton’s dad lived to be just shy of 102, and his aunt lived nearly to 103.

Despite his advanced age, Hamilton is heading into the century mark cheerful, energetic and cracking jokes. When asked how he likes to spend his time these days, he quipped “Looking for a beautiful lady! That’s a real fun job!”

Hamilton’s wit is actually a big part of what has kept him going for 100 years, he said.

“One of (secrets to a long life) is your frame of mind,” he said. “You have to think positive. And of course, humor factors into that, too. And then there’s the satisfaction of treating people right, making friends and being available if anybody needs help. Religion is another important item. And then learning different things.”

Hamilton was born in Craig in 1921, one of nine children. When he was 10 years old, his mother died, and he and his younger siblings were sent to Sheldon Jackson School in Sitka to attend boarding school. He has fond memories of the school and the friendships he formed there.

“I didn’t experience much mother’s love,” he said. “I had my dad but it didn’t feel quite the same. Sheldon Jackson was a real help in that area because it was it was like family.” 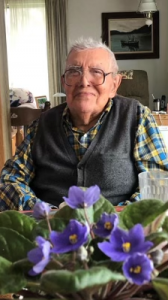 In the summers, he returned home to Craig to commercial fish with his family and earn the $35 he needed to cover his annual tuition at Sheldon Jackson. He enlisted in the Navy in 1942 and was stationed in Dutch Harbor and Kodiak during World War II. The Navy eventually brought him to Seattle, where he met his future wife, Beverly Jean Bailey, and got married. In 1948, he returned with his bride to Craig and bought their first home for $3,000. He has lived in Craig ever since.

The city’s resolution designating Feb. 2, 2021 as Fred Hamilton, Sr., day, cites Hamilton’s lengthy track record as a dedicated community volunteer, including serving as a Boy Scout leader, time keeper at school basketball games, volunteer fireman, school board member and city council member; his service as a board member of Shaan-Seet, Inc. and membership in the Alaska Native Brotherhood and Tlingit & Haida Indian Tribes of Alaska; and his lifetime membership in the Craig and Klawock Presbyterian Church.

The pandemic has been difficult, he said, because it has kept him from attending church and limited the amount of contact he’s had with people outside his immediate family. But he said he feels very lucky to have so many members of his family in town, including three of his five children and four of his 12 grandchildren. (Hamilton has 18 great grandchildren.)

“I do quite a lot of reading, and the grandkids and the family come here and take extra care of me,” he said. Hamilton still lives independently, but family members come over and cook for him daily.

“I feel that I’m very fortunate, you know? It’s kind of unusual. Most people, as they get older, what kind of gets them is being lonely. I try to keep up with the kids and grandkids. They kind of spur you on.

“And I’m still looking for a second wife,” he cracked. Hamilton’s wife Beverly died in 2005.

Although he voiced concerns that people today are too attached to their smartphones and TVs, he did say “I’m really happy to that people are finally acknowledging our heritage. It’s been quite a few years, but it’s really important. It’s important to honor our past and our ancestors, and to not be ashamed of what you are or where you came from.”

His last piece of advice for younger Haidas was to try to live more off the land. “I’m real fearful that we’re losing our style of living because things are being overfished and overlogged. I know that’s changing, but money has power. We have to be careful in our choices and our advice.”

Hamilton’s son, Fred Hamilton, Jr., said his father loves to receive mail and encouraged fellow Haidas and others to send him a birthday card or note to his mailing address in Craig, P.O. Box 127, Craig, AK 99921.