Every two years, Sealaska conducts a shareholder survey to identify your priorities. Those priorities are the road map to our public policy work and help guide the shareholder benefits we are grateful to be able to provide through the success of our businesses.

In 2021, Sealaska’s board and executive leadership launched what will be a multiyear effort to hold leadership meetings in communities where our shareholders live in high concentrations. That means meetings in nearly every community in our region, plus Anchorage, Fairbanks, Seattle, Portland and San Francisco. In conversation with leaders in local municipalities, ANCSA urban and village corporations, tribes and community groups, we seek to support and elevate the local priorities.

The following are a few of the issues we’re working on in early 2022 on behalf of shareholders and descendants:

In September, Sealaska announced a bold, Indigenous-led vision to transform the economy of Southeast Alaska and center Native values in regional land-management decisions through establishment of the Seacoast Trust.

The Seacoast Trust will one day be a $100 million trust whose earnings will support community priorities. Sealaska launched the trust with $10 million in matching funds, which was met in September with $7 million from The Nature Conservancy. The Rasmuson and Edgerton foundations committed another $2 million in December.

Collaboration between an Alaska Native corporation and one of the world’s largest conservation groups may seem surprising to some, but it’s nothing new to us. Sealaska, The Nature Conservancy, the U.S. Forest Service, state agencies, local and tribal governments, nonprofits, and private industry have been working together in Southeast Alaska for more than 10 years through a network called Sustainable Southeast Partnership. Projects like recently completed affordable housing in Yakutat, a salmon predation study of Klawock Lake, and the distribution of 49,000 pounds of salmon to traditional communities in the summer of 2020 are just a few of the projects that have been made possible through this network, and we can’t wait to do more of it.

Sealaska and its partners at The Nature Conservancy are actively seeking donors to help us fully capitalize our self-sustaining vision for regional economic development. The next major fundraising milestone is $20 million, and we’re almost there. The earnings will begin generating around $1 million in unrestricted funds to support the work of SSP in the region. That means regional philanthropy will be guided by local and Native values, not the interests of foundations and donors outside Southeast 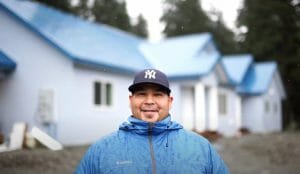 People often ask, how can my community benefit? It’s simple. This network is powered by people who want to work together on shared priorities. The door (or more accurately, the Zoom meeting) is open to all. To learn how your community can get involved, email Ralph Wolfe at ralph@spruceroot.org.

The 50th anniversary of the Alaska Native Claims Settlement Act was on December 18, 2021, and for five landless communities in Southeast, the fight to be included in the land legislation continues.

Over the years, Sealaska, the Southeast Alaska Landless Corporation (SALC), and many others have worked with Alaska’s congressional delegation to advance proposal after proposal to resolve the inexplicable injustice that left Haines, Ketchikan, Petersburg, Tenakee Springs and Wrangell out of ANCSA. Their exclusion — which historians and ANCSA scholars have never been able to explain — left Alaska Natives in the five communities without the opportunity to form urban corporations and make land selections in their communities.

With more than a decade of personal experience pushing legislation at the federal level, meeting with community advocates and pouring over maps, Jaeleen Kookesh, Sealaska’s vice president of policy and legal affairs, is more optimistic now than she ever has been.

In May, Rep. Don Young introduced H.R. 3231, the Unrecognized Southeast Alaska Native Communities Recognition and Compensation Act, and Sen. Lisa Murkowski followed with a Senate version of the bill in mid-November. It’s definitely not the first time bills have been introduced, so why is Kookesh optimistic?

First, the legislation was introduced early enough in the current two-year session of Congress for committee meetings and hearings to be held and support generated.

Second, staffers from Murkowski’s office spent a lot of time in the five communities this summer, meeting with locals and pouring over maps to identify specific land selections for each community. Maps were included with the proposed legislation for the first time in 2020, but that bill was introduced too late in the session to receive a hearing.

“This is the first time there will be real discussions around the map,” Kookesh explained. “Conservation interests have told us, ‘We don’t disagree there’s inequity, but we can’t support you because we don’t know where you’re going.’”

The 23,040 acres owed to each of the five communities will come from adjacent federal lands. Kookesh described the process as “squeezing the Jell-O” because when a selection is made in one area, it impacts other interest groups. The amount of discussion and negotiation can be overwhelming at times.

However, the grassroots work done in Alaska with a broad range of stakeholders to identify land selections gives hearings in Congress significantly more substance because the land selections are no longer theoretical.

For the most current information on the status of the legislation, please visit withoutland.org and sign up for the Alaska Natives Without Land newsletter.

Alaska’s congressional delegation is well informed and uniformly supportive of resolving this injustice in ANCSA.

Shareholders and descendants can help push the legislation forward by signing the Unrecognized Southeast Alaska Native Communities Recognition and Compensation Act petition to show your support. Signatures from shareholders in Washington state, Oregon, California, Arizona, Nevada and elsewhere are especially important because we need lawmakers from outside Alaska to get behind the cause!

Sealaska would like to extend its thanks and appreciation to our partners at Central Council of the Tlingit and Haida Indian Tribes of Alaska, who helped distribute $5.3 million to Sealaska shareholders through our joint Coronavirus Aid, Relief and Economic Security (CARES) Act program. The funding was provided by the U.S. Department of the Treasury to tribes and Alaska Native corporations to help Native communities disproportionately impacted by COVID-19. Sealaska was allocated $4.2 million under the Treasury Department’s funding formula, and Tlingit & Haida added $1.1 million, allowing us to provide $500 payments to 10,600 shareholders.

Sealaska recently joined Alaskans for Better Government in support of a proposed ballot measure to institute formal legal recognition of all 229 Alaska Native tribes by the State of Alaska. This ballot initiative would provide Alaskans – rather than the Legislature – a chance to vote on the matter directly and finally ensure an equal, government-to-government relationship between Tribes and the state. All Alaska tribes have been federally recognized since 1994.

With no recognized government-to-government relationship in place, the state is not currently compelled to collaborate to create solutions or operate alongside tribes as equal partners. This gap is especially seen with issues disproportionately faced by tribal citizens, such as access to justice, public safety, education and more. By definition, Alaska’s tribes work to strengthen and protect our communities. Formal recognition by the state would represent a meaningful declaration of partnership, establishing a more productive, cooperative relationship for all three governments – tribal, federal and state – to work together successfully for the benefit of all Alaskans.

The Alaska Tribal Recognition Act – co-chaired by Central Council of the Tlingit and Haida Indian Tribes of Alaska President Chalyee Éesh Richard  Peterson and Sealaska directors La quen náay  Liz Medicine Crow and Wáahlaal Gíidaak  Barbara Blake – will advance discussion of the benefits and role of tribal sovereignty in relation to citizens as well as the wider state of Alaska. Seeing this initiative on the ballot will capitalize on the momentum of the upcoming 2022 elections, inviting candidates to speak to Native issues and Tribal sovereignty and tell voters where they stand.

Similar efforts have been made in previous years through various avenues, including a bill introduced in the 2021 legislative session by Representative Tiffany Zulkosky. Despite inroads made with prior administrations, the relationship between tribes and the state has remained ambiguous at best, and often tumultuous or even litigious, as the State of Alaska has sued tribes more than any other state in the country. By utilizing the ballot measure process, the decision would be placed in the hands of Alaska voters, rather than the Alaska Legislature. Polling has indicated majority support for the ballot initiative, signifying a likely path to success.

H.R. 784 would allow pregnant, postpartum and breastfeeding women, infants, and children up to age 5 participating in the WIC (Women/Infants/Children) supplemental nutrition program to use program funds to purchase cultural foods like salmon.

The legislation gives the authority to state-level WIC program officers to determine which foods are best suited to meet the nutritional needs of their residents. In Alaska, this includes Sealaska shareholders and descendants, among other Alaska Natives.

“Our shareholders and Native communities deserve the ability to feed themselves and growing children the absolute most nutritious food available,” said Sealaska director ‘Wáahlaal Gíidaak Barbara Blake. “That just happens to be our Indigenous foods. We know that a large portion of our people have food allergies to many of the foods currently available within the WIC program. This is a great opportunity to give our mothers and children the absolute best nutrition available.”

Sealaska believes that access to healthy, traditional foods is critical to the health and well-being of our people. We appreciate the special attention Young has given to this issue through his advocacy, and will continue to fight for equity for our people at the federal, state and local level.

For more information on Alaska’s WIC program and a list of foods that are included in the program, visit https://dhss.alaska.gov/dpa/Pages/nutri/wic/approved-foods.aspx.