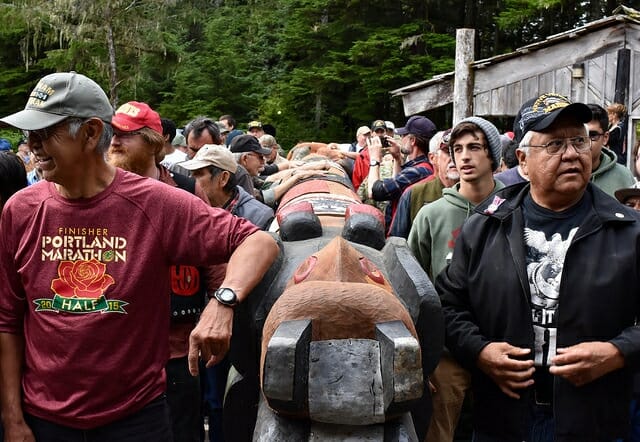 Alaskans and the rest of the nation are taking time this weekend to honor U.S. military veterans. Veterans Day, recognized each November 11, is a time to recognize and honor those who served in the US Armed Forces. According to the US Department of Veteran’s Affairs, Alaska Natives and American Indians have played a vital role in the military.

U.S. Senator Dan Sullivan acknowledged the patriotism of the Alaska Native community at a Veterans Totem Pole raising ceremony held recently in Klawock, AK. “Alaska Natives serve at higher rates in the military than any other ethnic group in the country,” said Sullivan. “That is what I call special patriotism. Generation after generation served in World War II, Korea, Vietnam, Iraq, and Afghanistan.”
The National Museum of the American Indian (NMAI) will construct a permanent memorial at the Smithsonian. The National Native American Veterans Memorial will honor Native veterans, past and present, and be a place for reflection.

Sealaska is proud to join the long list of Native nations, organizations and veteran’s groups who have made a financial commitment. Sealaska directors approved $50,000 to support the construction of the memorial. We thank our veterans for their patriotism and service to our country. Sealaska is proud to contribute to a meaningful cause. Sealaska’s long history of supporting Veteran’s programs aligns with our values

Sealaska advocates for veterans and has been a strong supporter for the passage of the Alaska Native Veterans Land Allotment Equity Act (H.R. 1867 | S. 785).  Hundreds of Alaska Natives were on active duty serving in the Vietnam War. As a result, they did not have the opportunity to apply for Native Allotments. The legislation would allow those who qualified to apply.

Vietnam veteran and former Sealaska Director Bill Thomas (in country Vietnam Veteran-1968) says he’s proud of Sealaska for supporting the memorial. “With the high percentage of American Indians who are veterans, this contribution by Sealaska pays a great tribute to all American Indians past present and future,” said Thomas. “I am totally supportive of this contribution to honor our veterans, Southeast has never hesitated to serve our country. When I was growing up, I understood that I would serve my country like my uncles before me. I am proud to be an American Indian veteran.”