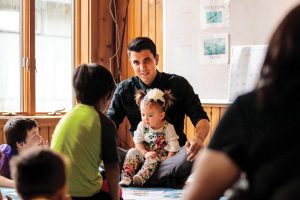 On Friday, July 23, 2021, Sealaska’s Board of Directors approved $450,000 in donations to fund language-preservation programs and a social service project spearheaded by organizations in Southeast. Three of the grants, totaling to $400,000, will go toward invigorating all three of Southeast Alaska’s Indigenous languages: Lingít (Tlingit), X̱aad Kíl (Haida), and Sm’algyax (Tsimshian). The fourth grant, for $50,000, will go to support development of Juneau’s Teal Street Center.

The language grants were made from the $10 million language endowment established by Sealaska in 2019 to help develop more advanced speakers of the region’s three Indigenous languages. Sealaska shareholders regularly rank preservation of traditional languages as one of their top priorities for the company.

“It is great to have partners working together on language revitalization efforts,” said Joe Nelson, the chair of Sealaska’s board of directors. “We need everyone pulling together so that our advanced learners can reach the fluency level necessary to become master teachers.”

The Teal Street Center grant was awarded to support the development of a new building that will house social service organizations in Juneau. The facility is being constructed adjacent to the new Glory Hall location near the Juneau Airport and will include providers serving individuals with physical or mental health disabilities, at-risk youth, Elders, veterans, cancer patients and low-income individuals and families. Housing all of these providers under one roof will eliminate barriers like transportation, time and cost for clients trying to meet with multiple providers.

Sealaska is a for-profit Alaska Native Corporation owned by more than 23,000 Tlingit, Haida and Tsimshian shareholders. Incorporated in June 1972 pursuant to the Alaska Native Claims Settlement Act of 1971 (ANCSA), Sealaska owns and manages 362,000 acres of land on behalf of its shareholders – roughly 1.6% of the traditional homelands that the Tlingit, Haida and Tsimshian people have inhabited for more than 10,000 years. Dedicated to the twin goals of economic prosperity and environmental protection, Sealaska’s businesses are focused around contributing to or restoring the health of our oceans and land through marine science and engineering that relies on both modern techniques and ancestral knowledge.