In Kake, the Keex’ Kwaan Culture Camp is a rite of passage. Held annually for more than three decades, the week-long event pulls in just about every school-age kid in Kake and marks a transition during the long summers of childhood — before Culture Camp, and after.

As with just about everything in 2020, this year’s camp was different, but the determination on the part of the Organized Village of Kake (OVK) to share culture with the young people of Kake was as strong as it has been since the camp started in 1988. 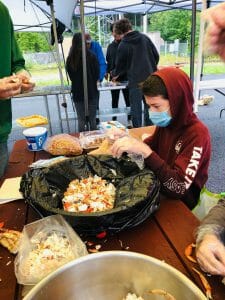 “It was pretty interesting to try to take what is traditionally very hands-on material and translate that into an online program,” said Dylan Lee, sharing knowledge coordinator for OVK. “It was a huge team effort and we had a lot of meetings at OVK asking ourselves how we can relay the material and not just relay it, but really do it justice. It’s important for us at OVK that we pay homage to the generations that came before us and this is one area in which we can do that.”

Rather than gathering on the beach for camp each day — as they would in a normal year — day campers (kindergarten through fifth grade) received daily deliveries of packets containing arts and crafts activities and Tlingit language-learning exercises.

“We put the packets together and went around in our van in our PPE and dropped them off, porch to porch,” Lee said.

For the older students who would have normally participated in the overnight camp, they were still able to participate in person with careful social distancing measures in place. The numbers of campers were limited to those who could fit on the outdoor basketball court near the community’s new teen center — while wearing masks and staying six feet apart from one another. The older campers were able to participate in drum making, cedar weaving and meals consisting of traditional foods like moose, deer, salmon and halibut, all donated to the camp by locals.

“We’ve been distancing for quite some time, and none of the kids have been able to interact with anyone, really, so they really appreciated being able to come and see other people, even if it meant staying apart and wearing masks,” Lee said. “They took it in stride if it meant they were able to come out and be a part of something.” 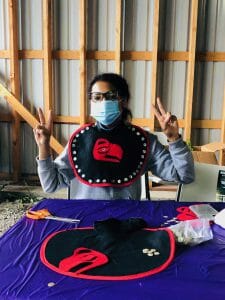 OVK also presented some of the material students would have learned in person in a normal year as live streams on Facebook, including one tutorial on how to harvest spruce roots. Lee said it was important to everyone at OVK to keep the camp going in some format this year despite the difficulties presented by the pandemic.

“The original intention of Culture Camp was to set aside the week to intrinsically explore your culture and think about who is going to pass on the material to future generations,” Lee said. “When you’re a kid, you think your Elders are going to be culture bearers forever, but in the later years (of Culture Camp) you become aware that you are a culture bearer: ‘Someday, I’m going to be the one passing this on to future generations.’ So, we stayed true to that core purpose.”