Feeding people while healing the planet for future generations

In the next 50 years, the world’s population will grow by nearly 3 billion to a total of 10.5 billion people, according to the United Nations. Most of these billions of people will be born into poverty. How will our planet, which is not growing, support these children and families? Access to healthy food and clean water will become even more important in the years to come, and yet humans are increasingly living out of balance with finite natural resources.

These realities call on Sealaska to use its unique assets to serve and make a positive difference. Sealaska is a company owned by 23,000 shareholders with 10,000 years of shared history and culture and a strong sense of connection to one another – and to the land and the sea. Alaska Natives have been sustainably harvesting seafood for millennia. This history informs Sealaska’s investment in seafood, and in ensuring the oceans that sustain that food source thrive. Earth’s oceans are key to feeding the world as its human population swells.

“That’s why seafood is so fundamental to our thinking,” says COO Terry Downes. “Our investment in seafood and the maritime industry is an extension of our shareholders’ long history of using and managing the natural resources that have sustained communities for thousands of years.”

Fisheries are among the most energy- and water-efficient sources of protein on the planet, according to the University of Washington. Seafood is also among the most nutritious of proteins. This is important for expanding human populations, including a burgeoning middle class in many parts of the world, Terry says.

“As people get richer, they want more protein,” he says. “This is the least damaging source of protein that’s out there.”

Central to Sealaska’s investment in seafood and ocean health has been choosing carefully what parts of the seafood business to occupy, and partnering with others who have a history of success in an industry in which many companies lose money. 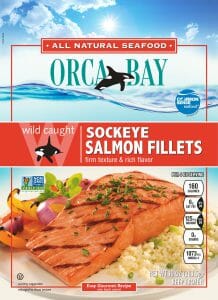 Such partners include Jeff Buske, president of Independent Packers (IPC), Phil Crean, president of Orca Bay Foods, and the three owners of Juneau-based Barnacle Foods. All were running efficient, profitable seafood-processing businesses before joining forces with Sealaska, and they have continued that success as part of the Sealaska family since 2016, 2017 and 2020, respectively.

Conversations with all of these Sealaska partners make clear that caring for people and community, avoiding waste and focusing on adding value drive their companies’ success.

IPC and Orca Bay Foods play different – but equally important – roles in the chain that connects those who harvest fish with those who eat it. Both create meals that are delicious and easy for customers to take home and prepare, which encourages people to eat more seafood.

Orca Bay’s primary customers are leading food retailers. Its team works closely with customers to develop products the retailers know their customers want to buy, and then – in its processing plant in south Seattle – it turns seafood purchased from fishing companies into packages that include skinless, boneless portions of wild-caught Alaskan salmon, cod and halibut. Other products include prepared “Cioppino” fisherman’s stew and King Crab legs. Orca Bay’s website features a ZIP code search to find its branded seafood. But most of what it produces carries the private-label brand of the retailer. Private labeling is a national trend. Regardless of brand, though, these efforts are unified by a desire to promote and grow seafood consumption because of its many benefits. Alaska seafood plays a central role.

IPC’s products are also available to buy from leading retailers. But its primary customers are fishing companies – including many in Alaska. IPC brings creativity, research and partnership to helping these suppliers turn every part of the fish they worked hard to harvest into delicious meals and other products they can sell across the country at much higher prices than they could command just by selling the fish. Examples include cod portions in flavored sauces, wrapped burritos with fish portions in them, and “taco packs” of pieces consumers can turn into fish tacos. Jeff describes IPC as a service company that adds value for fishing enterprises, which benefit from the partnership.

“We’re constantly looking for ways to make money for suppliers,” Jeff says, emphasizing the importance of integrity in the supply chain. “We’re 100 percent transparent about the entire thing. We want to show where and when the fish were caught. This is exactly the opposite of a wasteful fishery.”

“If you take a resource from the ocean, to discard it is abhorrent to me,” Jeff says. “It’s a limited resource that needs to be managed to the maximum effect. It’s just the right thing to do.”

Collaboration is key to IPC’s process, which brings retailers and fishing companies together to solve problems in a holistic way. Whenever fish are converted into forms such as fillets, other pieces need to be used in other ways to avoid waste and make the most of every fish. IPC works closely with retailers to determine which products will work well for them.

“In my opinion, that’s exactly how it should work,” Jeff says. “Everyone is at the same table, instead of operating as disconnected pieces.” 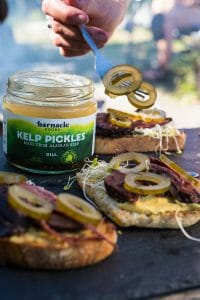 Barnacle Foods brings a new dimension to Sealaska’s seafood portofolio, with a collection of products featuring bull kelp and other Alaska-grown, harvested and foraged ingredients.

“We started Barnacle out of our passion for the wild foods that we have in Southeast Alaska, and for sharing those foods,” says co-founder Lia Heifetz. A commitment to keeping the value of harvested ingredients local infuses Barnacle’s business. So does a passion for keeping ecosystems healthy long-term.

“We want Barnacle to create opportunities for young people to continue living and thriving in their communities,” Lia says. “By sharing the foods from these special places, we’re creating a model around stewardship and sustainability, and a framework for Alaskans to plug in and prosper.”

The leaders of these companies bring a range of experiences and come from different corners of the planet. What unites them is a shared commitment to addressing the issues associated with population growth and climate change – a shared commitment to making a positive difference. And this is what makes them ideal partners for Sealaska.

Sealaska shareholders can be proud of that, and of Sealaska’s successes with seafood, Phil says.

“This is very much a success story,” he says. “Sealaska invested in good companies with good positions in the market. This is going to be a great move for generations.”