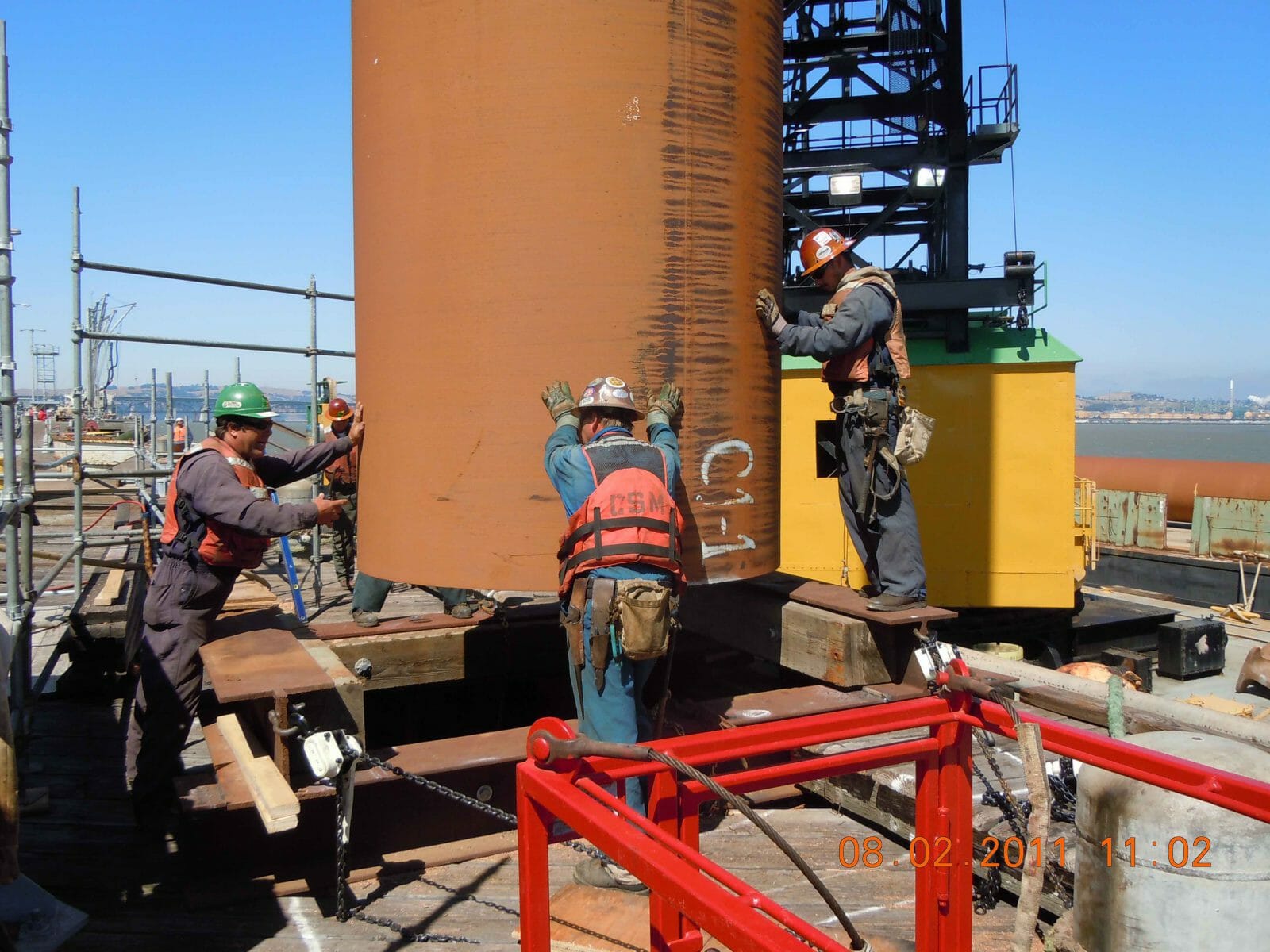 Growing up in the land-locked Midwest, Mark Weisz knew he loved to be active outside. He knew he was fascinated by how big projects – the kind that involve timber, masonry and steel – are designed and built. His passions drew him to civil engineering. What he didn’t know at the time was that they would also steer him toward a career in marine construction.

Now settled on the West Coast, Weisz serves as a project estimator and engineer for CS Marine Constructors, Inc., a Vallejo, California-based company that has enabled him to learn and grow through a wide variety of fascinating challenges over his 20-year tenure.

“It’s very exciting,” Weisz says of the work. “You’re on the water. Things change by the minute. The tide goes up, and that changes everything.

“We all wear a lot of hats,” he said. “The variety is great. I get to do a mixture of things.”

That range of capabilities, together with CS Marine’s demonstrated skill at finding solutions for complex challenges, inspired Sealaska to approach it about partnership. Now CS Marine is joining Sealaska’s growing set of subsidiaries as part of the Alaska Native Corporation’s effort to improve ocean health and address the inevitable consequences of climate change, such as sea-level rise.

Sealaska Vice President Dave Aldrich is an accomplished geophysicist who is helping the company build its ocean-sciences business. Aldrich said CS Marine is a solid addition to Sealaska’s groups.

“They’re who people go to when they have difficult problems to solve,” he said. “They’re all about coastal engineering and design-build. They’re great problem solvers.”

Despite the company’s considerable success, CS Marine’s leadership is more focused on customers than on seeking recognition.

“We don’t blow our own horn. We just work with our clients,” Weisz said. “We like being the preferred contractor. It’s nice to be on the job because they want you to be on the job.”

Those jobs can involve anything from safely removing unexploded ordnance from the seafloor to maintaining buoys at harbor entrances to mitigating dangers associated with abandoned offshore oil platforms. CS Marine recently completed a challenging task to pull new pipe through two miles of existing underwater pipe off the coast of Southern California. In January, it retrieved a 66-foot tugboat that had sunk to the bottom of San Francisco Bay, while managing to contain all the oil in its tanks to avoid contaminating the water.

“It’s just a really interesting company,” Aldrich said. “They do a lot of unique things. They’re quiet about what they do, but they have an amazing resume.”

Jeff Thompson has run field operations for CS Marine since 1997. He takes personal satisfaction from solving difficult problems, whether they involve equipment, the environment, personnel or some combination of factors.

“The challenges are pretty significant at times,” Thompson said. “Being able to overcome those challenges and do it well is satisfying. The team we have in place is really what makes all of this work.”

Thompson described a recent job that involved deconstructing a timber pier without letting any of its 40,000-square-foot asphalt decking fall into the water, where the material can cause considerable harm. CS Marine completed the work safely and cleanly, he said.

Another example was a late-fall pile-driving job a few years ago at Alcatraz Island, the former federal prison in San Francisco Bay. The work had to be done at night to avoid intruding on the tourist experience of the facility during the day. The conditions were extremely difficult, with high currents and big waves in the cold and dark.

“There’s a reason people didn’t escape from that place and swim to shore,” Thompson said. “That was a pretty challenging job with regard to being aware of the elements.”

The knowledge and techniques that CS Marine has developed over decades can be applied in other areas where Sealaska’s companies work, including in the Pacific Northwest and in Alaska.

“There’s more to the job than just that job when you’re solving a problem,” Aldrich said. “That problem probably exists somewhere else, as well.”

Generations of Doing The Right Thing

CS Marine has been a family endeavor for four decades. Founder Chuck Stockon, who left a role at a leading marine-construction company to start his own business in 1978,  handed the reins to his son, Casey, in the mid 1990’s. Casey Stockon has been on the staff from the beginning. Casey’s sister, Jan, joined CS Marine in the late 1990’s to help manage the business.

The Stockons have infused the company with the kind of integrity, care and fairness that inspires employees to stay on and give their all for decades. One-third of the company’s 25 employees have worked at CS Marine for more than 27 years, and turnover is well below the industry standard. Scott Andrews, the lead yard fabricator, has been with the company since he was 18 years old. He’s 55 now.

Project Manager Kelly Blythe, who has been with CS Marine for 10 years, said that the organization’s sense of accountability – a philosophy that “we’re all in this together” – makes it successful with both customers and employees. As a small company, everyone is accessible for questions or advice, and everyone shares responsibility. Thompson agrees.

“One of the reasons this all works so well is the basic values from the top to the bottom are high morals and integrity,” Thompson said. “Once you put all that together, it comes out right.”

The company’s reputation for integrity starts at the top and trickles down, Weisz said. But Casey Stockon would rather not be the focus.

“All I’ve done is give people an opportunity to do their good work,” he said. “My thought process puts us here. But their work is really what puts us here. I just went along for the ride.”

Doing construction work on and under water – whether it’s pouring concrete, repairing piers and wharves, drilling, welding, or recovering machinery from the murky depths – is a special niche. Clients appreciate CS Marine’s candor about budgets and schedules. They especially appreciate that CS Marine makes good on its estimates, despite the many variables that can force changes. The arrival of an unexpected ship can drive days of delays. Crews have to accommodate wildlife, both above and below the water.

Weisz remembers a job that involved heavy work removing an existing oil terminal. When the crew returned on Monday after a couple of days away, they found that a swallow had crafted a makeshift nest and laid an egg in the middle of the job site over the weekend. Workers had to cordon off the nest and avoid the area – creating a quiet zone around it and taking care not to disturb it – until the swallow’s offspring hatched safely three weeks later.

“Those are the unknowns you don’t prepare for,” Weisz said. “You just deal with it.”

“We treat them fairly. We do what we say we’re going to do,” Thompson said. “They come away getting exactly what they thought they were going to get, and they feel good about it.”

“We always say yes,” Weisz said. “That’s why they call us back. That comes from Casey and his father. Taking care of the customer.”

The Stockons are also known for taking care of employees. CS Marine has kept its employees on the payroll through a variety of challenges, including the current coronavirus pandemic. Careful management has kept the company strong, but its employees and CEO say its success is about more than that.

“You have to do the right thing,” Stockon said. “That includes safety of employees, environmental safety, quality of work. If you make your decisions not on money but on right or wrong, it’s pretty clear.”

In marine construction, the variety is part of what draws people to the work. For the tradespeople who swing the sledgehammers and run the chainsaws, the work tends to be rough, heavy and big, Blythe said. Workers have to be comfortable working with their hands and sure on their feet.

CS Marine’s larger cranes tower about 150 feet above the water. Two cranes were required to salvage that San Francisco Bay tugboat, which had a weight similar to four fully loaded semi-trucks.

“We’re dealing with big loads,” Thompson said. “When you drive a seven-foot-diameter piling, it puts things in perspective to see somebody standing next to it.”

Blythe encouraged young people who are resourceful, love the water and love solving problems to consider a career in marine construction.

“Construction is the best thing ever, especially when working with this group,” he said. “It’s awesome. The people, the variety, the challenges – I love working here and being part of this team.”

The work can “seem sort of glamorous,” Stockon said. “It has a little aura around it because it’s different.”

Joining Sealaska will make it possible for CS Marine to expand into new areas, and will create new and different opportunities for its people. One such opportunity will be helping to clean up after California’s oil industry, which is in well-documented decline. Abandoned offshore oil wells and platforms will need to be decommissioned and capped to limit cancer-causing chemicals and the release of potent greenhouse gases. Renewable energy sources, such as ocean-based wind turbines, could be a priority in the future.

Learn more about CS Marine here or on their website.