It is natural that Morgan Howard sees the future of Sealaska – as well as its challenges – through the lens of communications.

As founder of Morgan Howard Productions, a communications company specializing in video, web, and social media, he has been telling the stories of Alaska Native people and Alaska Native Corporations (ANCs) since the mid-1990s.

Howard said he believes that Sealaska’s identity – the narrative link connecting culture, tradition and place with its various business enterprises – will be the source of its success in the coming years. He is eager to be part of that storytelling, and proud of the direction the company is taking that sets it apart from other ANCs.

“All other Native corporations are highly reliant on two ways of making revenue. One is resource extraction and the other is government contracting,” he said. “Sealaska does both of those things, but they aren’t primary. We’re doing something that is very difficult, which is becoming good at something – and that thing is tackling tough climate-change challenges.”

Howard is the only incumbent on this year’s slate of board-nominated candidates. First elected to the board in 2017, he is seeking his second term. During his first term, he established a subcommittee of the board focused specifically on communications, “because it’s that important.” (Howard chairs that subcommittee, along with the board’s Finance Committee; he is a member of the Shareholder Relations Committee.)

“There’s a direct line between being successful in business and being good communicators,” he said. “Narrative for us is very important as a people but it’s also very important as a business in regard to our customers. I think our identity can be a competitive advantage, and that customers of the future may buy from us because of who we are and what we believe in. Communications plays a huge role in that.”

Howard also cites language preservation as a major motivator and concern of his. He said he is proud of Sealaska’s recent commitment of $10 million toward preserving Lingít (Tlingit), Xaad Kíl (Haida) and Shm’algyack (Tsimshian). Howard said a conversation with the noted ethnologist and anthropologist Frederica de Laguna made a big impact on his thinking with respect to preserving language:

“I asked her, ‘If language dies, will the culture survive?’ and she unequivocally said ‘No, it will not,’” Howard said. “So the languages have to survive. Of course, culture is a living, changing thing – I understand that – but I’m talking about the positive values and attributes that make for healthy communities.” 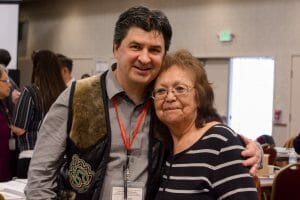 Howard is Tlingit, Teikweidí, child of the K’ineix Kwaan – people of the Copper River.  His Tlingit name is X’agatkeen. He grew up in Yakutat and Kodiak, and served 10 years on the Yak-tat Kwaan Inc. Board of Directors, from 2006 through 2016. He also served on the Tlingit Haida Tribal Business Corporation board for eight years. Howard’s business experience includes a number of his own entrepreneurial ventures, including establishing his communications business and a startup called NativeCo.com, which is a website designed to serve as a central source of information about Alaska Native Corporations. He also created the brand and merchandise line for the F/V Cornelia Marie, one of the commercial fishing vessels featured on the Discovery Channel’s hit show, Deadliest Catch.

Howard said he sees a role for Sealaska as a model of what for-profit corporations can do to improve their communities and serve as models of social responsibility.

“Every group of people wants the same thing, which is to make things better for their children,” he said. “I’m a big believer in free markets and private enterprise changing the world, and I think we walk our talk a lot better than most companies. We have a lot to learn, but we also have a lot to share.”