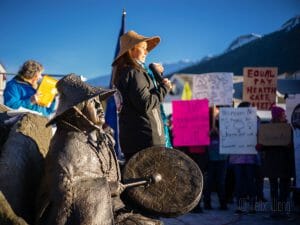 As a Sealaska Board of Directors endorsed candidate, Lisa Lang brings her understanding of the profound changes that Alaska, its lands, people, economies and cultures are and will be experiencing in the future.  She is dedicated to revitalizing cultural values and communities as the pillars of a strong region.   While she brings strength, vision and skills to the board, it is her humility that is most noticeable.

“It’s more about what an individual can do for a community,” She explained. “Sealaska is a community at large, and it’s a huge platform. I’m bringing the values I learned in my community to this board. It’s about what you give in this world, and in return what you receive – things like respect and hard work.”

Lisa is Haida and Tsimshian, and lives in Hydaburg, where she is the executive director of a Haida-language revitalization, non-profit foundation called Xaadaas Kil Kuyaas Foundation, or XKKF. She serves as an elected associate judge in the tribal court system administered by the Central Council of Tlingit and Haida Indian Tribes of Alaska, in Juneau. She also is currently assisting in the development of the Tlingit and Haida Tribal Youth Wellness Courts.  She has an extensive education which includes both a master’s degree in First Nations linguistics with an emphasis on Xaad Kil (Northern Alaskan Haida language) from Simon Fraser University in British Columbia, and a law degree from the University of New Mexico, holding her license since 2002.

Lisa has her grandmother Helen Sanderson’s Haida name, Ka’illjuus. A name she prefers to be called in the public forum.  She is Yahkw ‘Laana Clan, a Raven, Two Finned Killer Whale. A Yahkw Janáas, or woman of the clan from the K´aad Naay (Shark House). Her father was Gerald Osh Lang, who was a Tsimshian Eagle from Metlakatla, with Tsimshian and Tlingit roots from his mother, Cora Brendible-Lang-Booth.

Lisa says she is seeking a seat on the Sealaska board at this time because she feels the corporation and the current leadership are shifting towards embracing strategies and economic visions that align with her personal values and thinking. Investing in economic opportunities such as sustainable fisheries and carbon sequestration are examples of profitable, forward-looking enterprises she supports and feels are beneficial to Southeast Alaska.

Lang said before she decided to run for the board, she did a lot of research on the corporation, read reports, talked to other leaders and shareholders, listened to audio and video files going back many years. She wanted to be sure that if she was involved, it would reflect her values.

“In 2013, it looked like there was a really pivotal change at Sealaska,” She said. “I started to see a new direction emerge from the corporation that aligned with what I want to do in my life.”

She believes that the other candidates on the board-endorsed slate share her positive outlook, diligence and creativity.

“The 2020 board-endorsed slate is not coming in with any negativity,” she said. “We don’t have time for that.  When you have a crew that wants to work together – you set a goal, listen to each other, gather the best ideas, work though the tough issues and get it done.   We’ve done that in Hydaburg – it’s been miraculous to see different entities come together and be innovative, creative and keep moving toward our vision.”

Lisa said her candidacy comes at a pivotal time for Sealaska and its shareholders due to the coronavirus pandemic and its associated economic and social consequences.

She wants to ensure there are employment options for shareholders and descendants in the region, so all can come home and “put their feet on the land” if they want to. In her work on Indigenous languages, she said she draws great inspiration from Native Hawaiians and the Māori people of New Zealand and what they can teach us here at home.

“They dream big,” she said. “They taught me to open my eyes and broaden my horizons because the sky is the limit. If we imagine it, it can be.”