Building an Economy Around Kelp 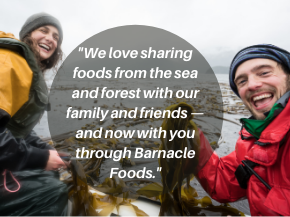 Lia Heifetz and Matt Kern took the plunge and started Barnacle Foods in 2016, knowing that kelp farming and the mariculture industry was just getting started. But their vision and confidence in a people- and planet-centered business philosophy are bringing others along with them.

One of the farms Barnacle Foods sources kelp from today is Seagrove Kelp Co. on Prince of Wales Island. Heifetz says Seagrove Kelp solidified its decision to submit a permit for a kelp farm about five years ago, knowing there would be a local buyer with the establishment of Barnacle Foods about the same time.

As they got Barnacle Foods up and running, Heifetz and Kern relied on knowledge and information shared by other farmers near and far. Now, they are the ones helping to mentor others.

“We get to play that role of sharing information among farmers, to involvement with the potential logistics or how to bring kelp to market,” said Kern. “There is speculation that kelp is desirable in California or Asia for production. To ship kelp, full of water, across the world is expensive transportation and intricate logistics. What’s unique about Barnacle Foods is that it’s a local market for the kelp farmers. Our goal to provide a local, high–value market.”

Heifetz and Kern estimate that about one–third of the kelp needed for producing their famous kelp products, like kelp salsa, hot sauce and other spices and condiments, comes from farmers in Southeast Alaska. The other two-thirds comes from wild kelp beds harvested by Barnacle Foods supplemented with kelp from fisherman. Next year, the goal is source half of kelp needed for production from famers.

“There is great potential around farming and a great opportunity for people living in the rural areas on the coast,” said Kern. “Part of our mission at Barnacle Foods is to support many farms versus one large farm.”

Barnacle’s commitment to strengthening local economies and its production of what is known as a zero-input crop, kelp, makes it a natural partner for Sealaska.

“Barnacle fits with who we are,” said Sealaska President and CEO Anthony Mallott. “Our shared values make this much more than a financial partnership.”

Barnacle Foods first intersected with Sealaska in 2016, when Kern and Heifetz won a Path to Prosperity (P2P) business competition offered by Spruce Root, the Juneau-based nonprofit organization established by Sealaska in 2012 to provide business coaching, workshops, loan capital and other services to Southeast entrepreneurs.

In April of 2020, Sealaska invested as a minority shareholder of Barnacle, and hopes to help other Southeast entrepreneurs who employ a similar business model dedicated to ocean health, locally sourced materials, strengthening local economies and offering employment to shareholders and descendants. For the first time this summer, Barnacle will also be hosting two Sealaska interns.

The analysis was published by Southeast Conference. Mariculture, a fledging industry in the region, is showing tremendous opportunity. 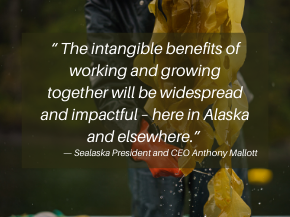 Before co-founding Barnacle Foods, both Kern and Heifetz worked in Alaska using their scientific backgrounds. Kern says in part, Barnacle Foods’ business philosophy was born while he worked with State of Alaska reviewing development projects. “Reviewing development projects, you can see the potential tradeoffs,” Kern said. “A new hydro project has the potential to produce electricity but also has the potential to block salmon from habitat. If an industry uses a local resource, it should equally benefit those closest to that resource. That may not be how an economy works and there are no laws that mandate that reciprocity, but it feels like the right balance.”

Heifetz and Kern were both raised in Southeast and cemented their partnership by harvesting and preserving local foods together. Heifetz said it was one of the first things they did together. “Kelp pickles and kelp salsa were foods that filled our pantry and our friend’s pantry,” Heifetz said. “It was a natural steppingstone, to stand up Barnacle Foods. It was during a time that kelp farming was emerging in the region. The big question for us was, if we grew a bunch of kelp, what would we do with it?

The mariculture industry is seen by the regional economic experts at Southeast Conference as one of the top opportunities for Southeast in the coming years. Barnacle’s products can now be found throughout Southeast Alaska, the Pacific Northwest and online.

“Through Barnacle Foods, we have the opportunity to create a company culture that empowers people and inspires people who value this place,” said Heifetz.  “Those are the greatest rewards and benefits of being a business owner and the mission of Barnacle Foods.”

This time of year, Matt and Lia are typically preparing the logistics and organization for the summer production that begins about June. The kitchen operates year round, but processing kelp typically begins in June, May if it’s a warmer season. A new Barnacle Foods product should be hitting the shelves this spring.