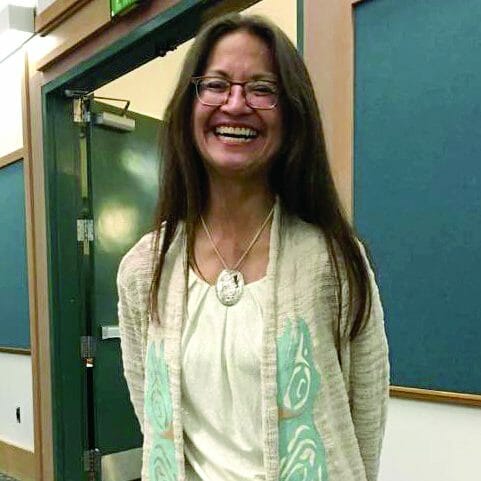 “My grandmother, Vesta Johnson from Hydaburg, taught me to be helpful; to be respectful of our elders, culture, nature, and subsistence food. She said: ‘If you see someone struggling; help them. Don’t stand by and watch.’ I embrace this philosophy and am eager to bring this mindset to my role on Sealaska’s board as I uphold my fiduciary responsibility to the shareholders.”

Vicki Soboleff is an accounting and finance professional who was born in Seattle, Washington, and raised in Ketchikan. She is currently the grants coordinator for The Tulalip Tribes in Tulalip, Washington, overseeing more than $25 million in grants. She has more than 20 years’ experience in finance and accounting, including 13 years with Sealaska corporation, first as managing accountant and then as corporate controller. She is the chair of the board for Haida Corporation, and is president of Haida Energy and a former board member of Catholic Community Services and Audit Committee.

Vicki is an artist, performer, mentor and teacher who has been involved in a variety of traditional arts and youth mentorship programs throughout her life. She founded the Juneau-based youth dance group Lda Kut Naax Sati Yatx’i (All Nations’ Children in Lingít) in 1995. The group still exists today, and she remains an advisor to the program. After moving from Alaska to Washington state in 2017, she continued her outreach to youth through the Washington chapter of Central Council of Tlingit and Haida Indian Tribes of Alaska, forming another youth dance group called X̲aat’áay ‘Wáadluwaan G̲aagáay (All Nations’ Children in Xaad kil). Vicki began studying cultural activities and Native languages in Ketchikan. She received instruction from Nora and Robert Cogo in Haida language, world-renowned Master Weaver Selina Peratrovich in Haida basketry, Julia Fawcett in moccasin making, and Beatrice Starkweather in traditional beadwork.  Her Haida grandmother, Vesta Johnson, also taught Haida language, songs and dance, and button-blanket making

In 2019 Vicki was honored to receive the President’s Everyday Hero Award from Tlingit & Haida for her work as a culture bearer.